If Nepal was defeated in the battle of Sindhuli, unification would not have been possible. The British would make Kathmandu Valley their colony, a point to access Tibet and China, which might as well have become the British colony later on.

We won’t be able to understand the greatness of the great king without assessing how he personally worked to unify the country. Here is a brief description.

King Prithivi Narayan was personally involved in nearly all of the unification battles. He himself led several unification battles and war against the foreign invaders. He was a front line soldier. He led the command of the troops in the battle of Nuwakot. Gorkhali troops crossed the Trisuli River and attacked Nuwakot on Sept 27, 1744 at daybreak and achieved victory. After the victory of Nuwakot, he led the troops to attack Belkot fort. Kaji Kalu Pande was not in favor of launching attack at the moment. But the king was insistent. Thus as Gorkha troops, with king in the palanquin, were proceeding toward Belkot, the opponent soldiers launched offensive with guns, spears and slings and even by throwing and rolling big stones down on them. Prithvi Narayan had a narrow escape but he did not give up though 60 Gorkhali soldiers were killed right in front of his eyes. Finally, with his valor and determination, King Prithvi Narayan prevailed. Belkot fort fell to the victory of Gorkha troops.

He led the battle of Kirtipur even though Kaji Kalu Pande was not willing to conduct this battle since he had a fear of being killed. The battle took place in 1767. Unfortunately, Gorkhalis lost it and Prithivi Narayan was almost killed by the Kitipure troops.

It had almost become a routine affair for Muslim rulers of Hindustan to sneak into the Kathmandu Valley and run the rampage of loot so as to consolidate wealth for them. Mir Qasim did the same. He deputed Gurgin Khan, the military commander, to go and invade Makawanpur palace.  Mir Qasim also allocated troops and weapons to enable Gurgin Khan to invade and loot the Kathmandu Valley after Makawanpur.

In December, 1672, Gurgin Khan with 3500 troops and arrived at Harnamadi field—today's Hetauda.   This led Prithvi Narayan Shah to the situation where he had to launch attack against the enemy.  So he led the troops himself and moved from Indra Daha of Dahachok to fight the enemy himself. But his courtiers did not allow him to go beyond for safety concern. So the king prepared for spoiling-attack by stationing troops at Dhunge, Dadhuwa and Makawanpur forts.  The Muslim troops attacked the Makawanpur palace on the morning of January 20, 1763. The battle continued throughout the day but the Muslims could not continue the battle during the night.  The war ceased. Meanwhile, reinforcement troops arrived from Dahachok. Then the Gorkhalis attacked from three sides. Many Muslim soldiers were killed and Gurgin Khan fled. The Gorkhalis seized two cannons and around 500 rifles.  This was the first time Nepal defeated the Muslim marauders who had been coming to Kathmandu Valley, looting its treasure and running away.  Then the Muslim looters never set foot in Kathmandu.

The war with Muslims set two records for Nepal. First, this was the first victory of Nepal against foreign troops, though Nepal was yet to be unified and consolidated. Second, from the weapons seized from here, King Prithvi Narayan Shah created five Companies with 100 sets of rifles each.

The battle of Sindhuli was perhaps the fiercest battle against the foreign invaders. When during the unification campaign, Prithvi Nayaran imposed blockade on the Kathmandu Valley, Malla kings had gone really nervous. Jaya Prakash Malla was the king of Kantipur but his son, mother, queen, and military generals were all opposed to him. When there was nobody to look up to, he had brought in around 300 mercenaries from today's Nagarkot (Kangara) and Kumaun of India for the protection of his palace. In the meantime, Jaya Prakash Malla wrote to the Patna office of British East India Company for military assistance to fight against the Gorkhalis. The British also lent the assistance with the hope that, once they established the foothold in Kantipur, it would be easier for them to access the trade route up to Kuti and Kerung of Tibet. 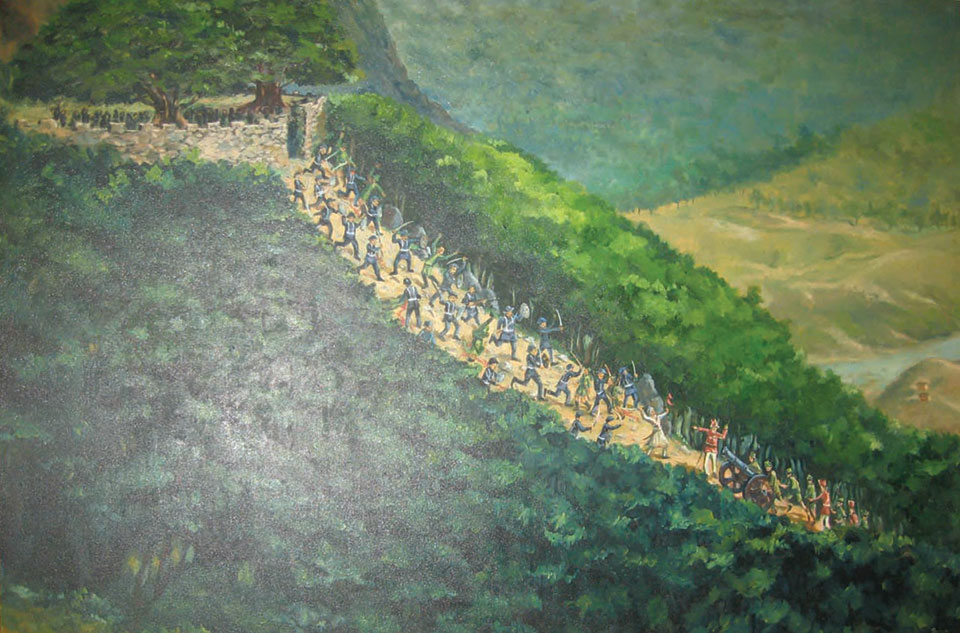 The British troops advanced for Kathmandu with this objective in mind.

This posed a big challenge for Prithvi Narayan. Thus he planned to attack the British troops right after they passed the Tarai plains and began to ascend to the hills. British troops were superior in weapons and tactics. So he planned to destroy them by laying multiple ambushes. Finally, the troops led by captain Kinloch were defeated.

If Nepal was defeated in this war, unification of Nepal would not have been possible. The British would make Kathmandu Valley (later on the whole of Nepal) their colony and would make it a point to access Tibet and China. The trade with Tibet and China would be in their favor.

This was the first instance of Nepal's war with the British India. This led the British to take harder position against Nepal and it also instilled in them a sense of vengeance. The war resumed in 1814 in the form of Anglo-Nepal War.

Nepalese troops which had defeated the armies of Mir Qasim in 1762 again succeeded to defeat the British infantry brigade. Nepali Army confiscated hundreds of guns and other weapons from the enemies. This raised the confidence of Nepali troops and it also contributed to rise of fame and prestige of Nepal in Tibet and China.  Among colonizers (British, French and Portuguese) in Hindustan, it established the fact that Gorkha soldiers are really brave and that Prithvi Narayan Shah was not only a king but also a capable warrior and a military strategist. Impressed by the soldiery and diplomacy of King Prithvi Narayan, the ministers of Patan and Kantipur had even made an appeal to him to become their king.   He, however, refused to do so and, instead, sent his brothers to become the kings.

If we fail to consider the circumstances in which Prithvi Narayan Shah launched the unification campaign, we will be doing an injustice to him. The primary consideration for the unification drive was to save the country from the looming threat of annexation by the powerful British East India Company, which had already set a strong foothold in Indian subcontinent and which was looking to subjugate Nepal for its own interests to have direct access to Tibet and thereby China.  It is for this reason that Nepalis of all generations need to commemorate him and recognize his contributions in giving birth to Nepal as a nation.

On the occasion of his birthday today (Poush 27), I want to pay heartiest respect and salute for his heroism.