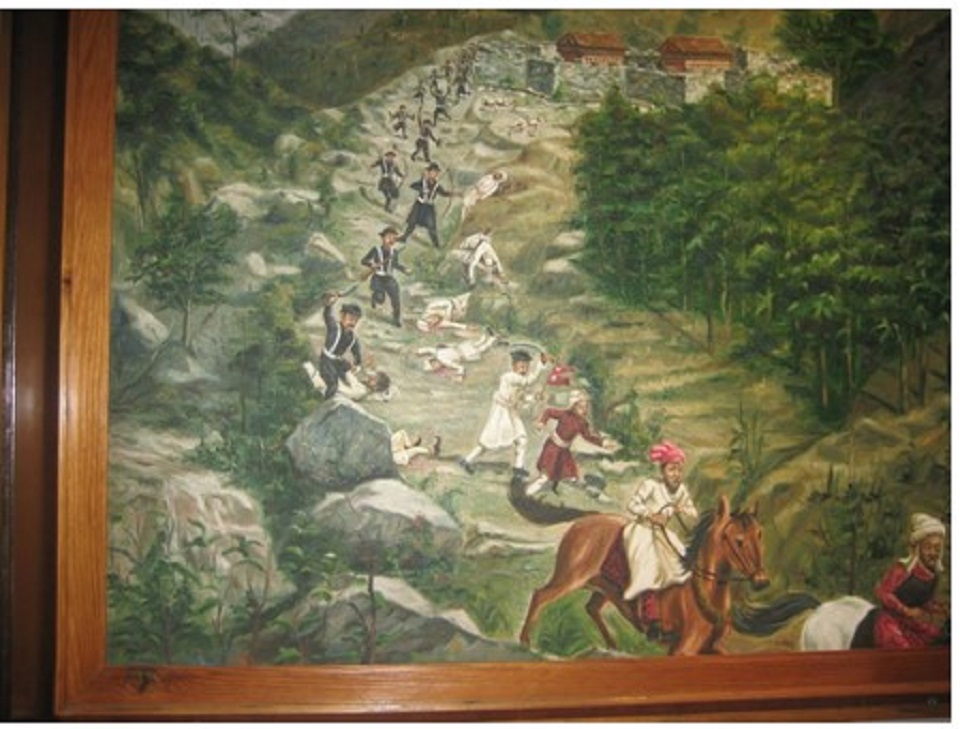 Makawanpur palace is a living witness to several of Nepal's wars: War of unification, battle against Nawab of Bengal, the war against British India and the Sugauli Treaty that followed.

Few kilometers away from Kathmandu on the hill of Makawanpur district stands a palace, also called a castle and a fort. It has a lot to communicate to us about our history and heritage, which I am going to write in this article.

LohangSen was the first Sen King who created an independent Makawanpur state by splitting Palpa in 1622 BS. Makawanpur state expanded up to the tributary of Brahmaputra and the Ganges.  Thus what is referred to as MakawapurGadhi in local parlance is actually the palace of the king of Makawnpur. Sen Kings and the kings who preceded them in SimraunGadh had built palaces that served as forts. The palace was built by first Sen King Lohang. Later king SubhaSen made it even stronger.

Makawanpur palace is a living witness to several of Nepal's wars: War of unification, battle against Nawab of Bengal, the war against British India and theSugauli Treaty that followed.

Prithvi Narayan, while a prince, was married to IndraKumari, the daughter of Hem Karna, around 1795 BS. The wedding had taken place in this palace.

The Gorkha troops decided to attack the capital of Makawanpur during the battle of unification in 1819 BS. In Kathmandu, Dahachok was the firm base of Gorkhali troops. The troops, under the command of ChautaraKriti Shah, marched on August 17, 1762 and reached there on August 20. As per the propitious time set by the astrologers, the attack started early morning of August 21.   The troops of DigbandhanSen fought in the battle. After around 400 soldiers died, all Sentroops fled the scene. King DigbandhanSen, Minister Singh Baniya, courtiers and other soldiers escaped to Hariharpur fort. Fearing the attack upon the palace, however, the king had shifted properties and his family, including the queen, to a safer location at the Hariharpurpalace.   Many historians and locals have said and written that Gorkhali army misbehaved, tortured, killed the Royal families including females then after some of them committedsuicide. But, it is a purerumor since all of them were shifted to the Hariharpurpalace before the arrival of Gorkhali troops.   Around 60 of the Gorkhali troops died but the Makawanpur palacewas later taken over by the Gorkhalis. A month later, they also attacked the Hariharpur fort—palace where king Dig BandhanSen was residing. They took over this fort too and DigbandhanSen fled to Khudaghat.

The war with MirQasim(Nabab of Bengal) also took place from this fort. It had almost become a routine affair for Muslim rulers of Hindustan to sneak into Kathmandu Valley and run the rampage of loot to consolidate wealth. Mir Qasim did the same. He deputed Gurgin Khan, the military commander, to go and invade Makawanpur palace.  Mir Qasim also allocated troops and weapons to enable Gurgin Khan to invade and loot Kathmandu Valley after Makawanpur. In December, 1672, Gurgin Khan left from Mursidabad with 3500 troops and arrived at Harnamadi field—today’s Hetauda.   This forced Prithvi Narayan Shah to launch attacksagainst the enemy and he himself the troops and moved from Dahachok to fight the enemy.

The king prepared for spoiling-attack by stationing troops at Dhunge, Dadhuwa andMakawanpur forts.  The Muslim troops attacked the Makawanpur palace on the morning of January 20, 1763. The battle went on throughout the day but they could not continue it during the night.  The war ceased. Meanwhile, reinforcement troops arrived from Dahachok and Gorkhalis attacked from three sides. Many Muslim soldiers were killed and Gurgin Khan fled. The Gorkhalis seized two cannons and around 500 rifles.  This was the first time Nepal defeated the Muslim marauders who had been coming to Kathmandu, looting its treasure and running away.  Then the Muslim looters never set foot in Kathmandu.  The war with Muslims set two precedents for Nepal.

First, this was the first victory of Nepal against foreign troops, though Nepal was yet to be unified and consolidated.

Second, from the weapons seized from this war, King Prithvi Narayan Shah created five Companies with 100 set of rifles each. It is often said Prithvi Narayan Shah developed Gorakh Company as the company of Magars. That's not true.  Nepal started to make companies or bigger units ofMagar, Gurung, Rai and Limbu to prevent the youths of these castes from joining the British armies after the Britishers started recruiting selectively from these castes. This was after the end of Anglo-Nepal war in 1816.

Third, the British East India Company formally declared war on Nepal on November 1, 1814. Of almost 2500 kms stretch of Nepal from Tista to Satlaj, the British launched attacks from seven places. Of them, Makwanpur was the vital location because of its proximity with Kathmandu.  Nepal stationed its troops in all of those seven places after the British declared war. In Makawanpur, Colonel RanaBir Singh Thapa commanded the troops in the first phase and KajiBakhtawar Singh Thapa—his own brother—commanded the troops in the second phase.  The Makawanpur palace was the regional headquarters of Nepal Army.

By May 15, 1815, Nepal had lost most battles at the western frontier beyond the Mahakali River,which had already become our western boundary, though in fact, Nepal had won all battles up to Tista River in the east. The British East India Company was not content with what it 'gained' on its eastern frontier and wanted to invade Kathmandu. To that effect, the British government appointed Major General Ochterlony, the man who was instrumental in defeating the troops led by BadaKaji Amar Singh Thapa in Malaun, and planned for an attack in Makawanpur area.

Many Nepali historians and scholars have written and spoken about Sugauli as being located in Makawanpur district. This is not true. Sugauli lies some 40 kilometers away, western side from Raxaul where there were barracks and administrative units of the British government.

KajiBakhtaar Singh Thapa was instructed by Nepal Durbar to reach that place and make a deal with the British government. Thapa deputed his representatives and the treaty was signed on December 2, 1816, which came to restrict Nepal's boundary from Mechi in the east to Mahakali in the west.

We tend to take historical palaces for granted. But they have so many stories to tell us about our past and history. MakawanpurGadhi is one such source of understanding our past.

DrBasnyat, Brigadier General (Retd) of Nepal Army, is the author of “Nepalese Forts and The Royal Nepalese Army in Fort Battles”