In Iraq Museum, There Are Things ‘That Are Nowhere Else in the World’

In Iraq Museum, There Are Things ‘That Are Nowhere Else in the World’ 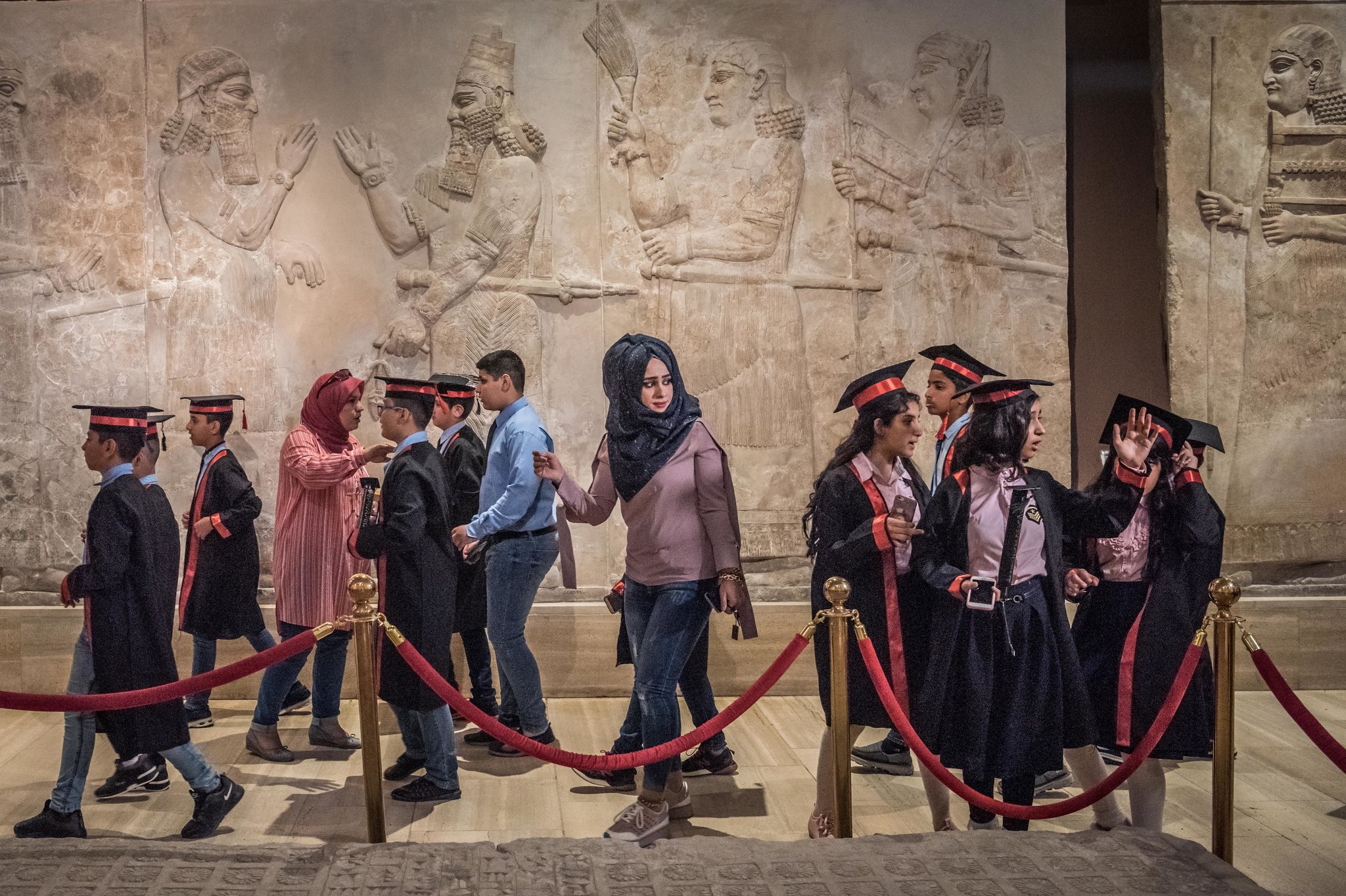 Passing by Assyrian murals at the Iraq Museum.CreditCreditSergey Ponomarev for The New York Times

BAGHDAD — If people remember anything about the Iraq Museum, it is most likely the televised images of it being looted in 2003 as American troops watched from their tanks.

Statues too heavy to move were knocked from their pedestals, their 3,000- and 4,000-year-old shoulders bashed to powder. Some lost their eyes or one side of their face. Glass cases were shattered, their contents gone or thrown on the floor.

One of the museum’s most treasured art works was the Warka vase, with carvings dating back five millenniums showing that even then the ancient Mesopotamians grew wheat and fruits, wove cloth, and made pottery. When someone walked off with it, a bit of human history was lost.

The same was true of the Golden Lyre of Ur, a 4,500-year-old musical instrument inlaid with gold, silver and carnelian.

The Golden Lyre of Ur. Credit Sergey Ponomarev for The New York Times 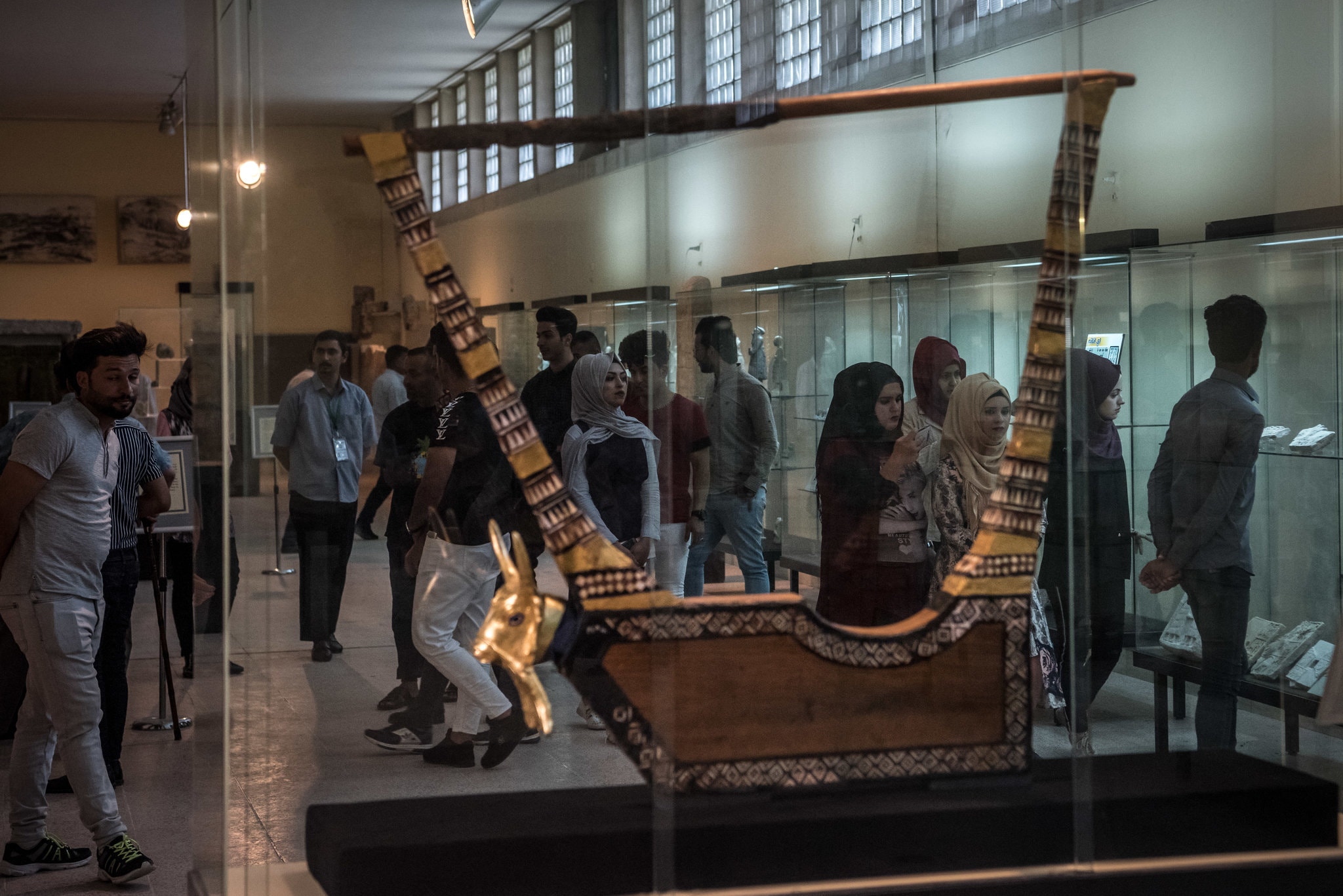 The Golden Lyre of Ur.CreditSergey Ponomarev for The New York Times

I was there in 2003 on the second morning of looting and was stopped about 150 feet from the museum entrance by crowds of Iraqis rushing by clutching clay objects I could not identify. They also carried more prosaic items — file cabinets, chairs and spools of electrical wire.

This spring, 16 years later, I was back at the museum. It had reopened in 2015 after conservators had repaired some of the damage and European countries, among others, had helped restore several galleries. Still, I expected to see bare rooms and empty niches.

Instead, I found that despite the loss of 15,000 works of art, the museum was filled with an extraordinary collection.

In a well-lit gallery, I stared up at two majestic alabaster creatures at least 12 feet tall but looking even taller because they were set on plinths.

They had the bearded faces of men, four or five legs, the wide wings of eagles, and the bodies and tails of bulls. Known as lamassu in the ancient Sumerian language, they were thought to be spirit guardians so they were set at city gates, palace entrances and the threshold of throne rooms.

At the museum, scientists work on the restoration of a winged bull from an excavation site. Credit Sergey Ponomarev for The New York Times 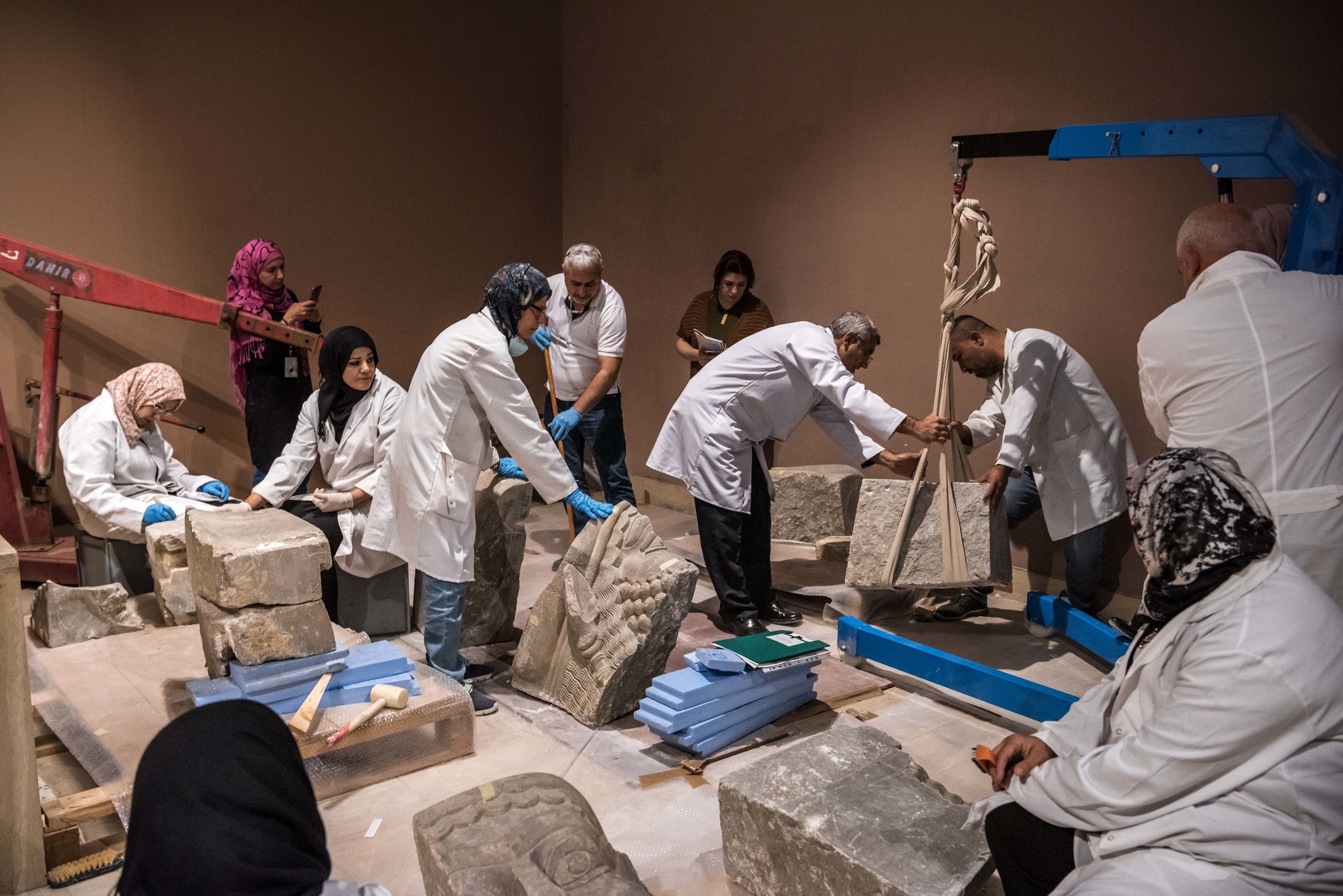 At the museum, scientists work on the restoration of a winged bull from an excavation site. CreditSergey Ponomarev for The New York Times Here, they watched over two long rooms of friezes that showed ancient Mesopotamians carrying tribute or walking beside their horses, which were finely carved with muscled flanks and elaborate reins.

The lamassus and friezes survived the looters because they were too heavy to haul away.

Art historians and archaeologists know how exceptional the collection is. But despite Baghdad’s relative safety today, neither the city nor the museum have yet to become a major destination for Iraqis, much less foreign tourists.

“There are things there that are nowhere else in the world, especially from early Mesopotamian history,” said Christopher Woods, the director of the University of Chicago’s Oriental Institute, who recently visited Baghdad.

“It’s a textbook collection,” he said.

In addition to trying to get back the pieces that were looted (some 4,300 have been recovered), the challenge now is to make the museum accessible to as many Iraqis as possible, said Abdulameer al-Hamdani, the recently appointed Iraqi culture minister.

“I’ve ordered the museum to be open every day and I’ve asked to let graduate students and university students come for free,” said Mr. al-Hamdani, an archaeologist by training who has a doctorate from the State University of New York at Stony Brook.

How to Host a Relaxed, Italian-Style Late Lunch

He’s Spent Just One Night on His Private Island. He’s Had Enough. 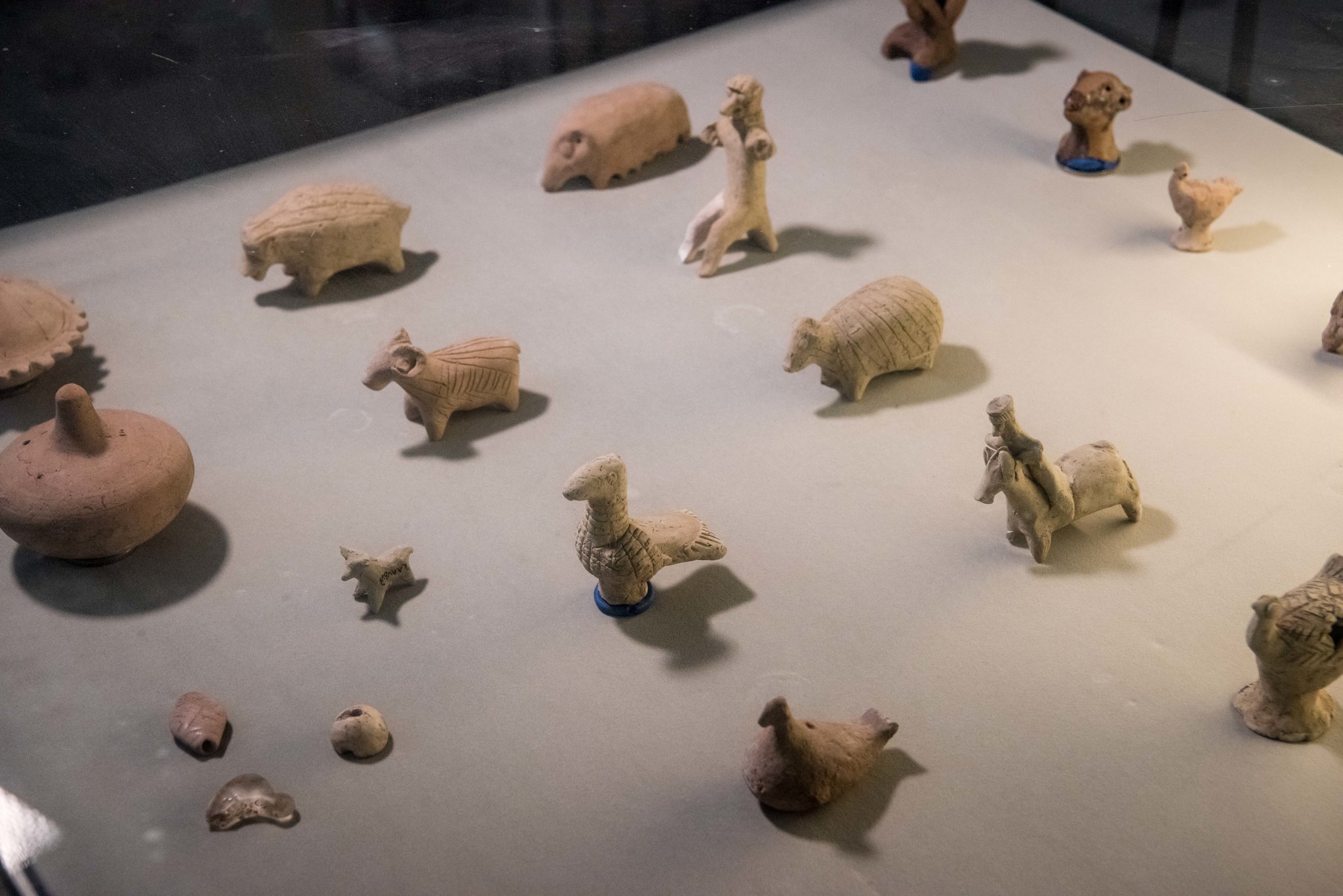 Pottery birds and animals, probably toys, dating from about 1830-1600 B.C.E. Credit Sergey Ponomarev for The New York Times Still, it is hard to get visitors, especially younger Iraqis, to feel that the museum’s art is relevant to their lives, he said.

While many more school classes come now than in the past, there is little to guide them — no docents or audio-guides, and scant audiovisual aids. The children rush through, stopping to touch a lamassu or another statue and then dash on.

Some days the museum is almost empty as it was when I visited, except for a few teenagers and three men from Diyala Province, who had come on their day off. They were eager for information but barely read the sometimes technical labels.

Three of the teenagers, who had come on their own when their classes finished for the day, glanced up briefly at the lamassus’ benign faces, but seemed not to know what to make of them.

“I liked the other room with the statues better,” said Amina Atiyeh, 14, as her companions nodded in assent.

Restoring a piece of a decorative column from about 1500 years ago. Credit Sergey Ponomarev for The New York Times 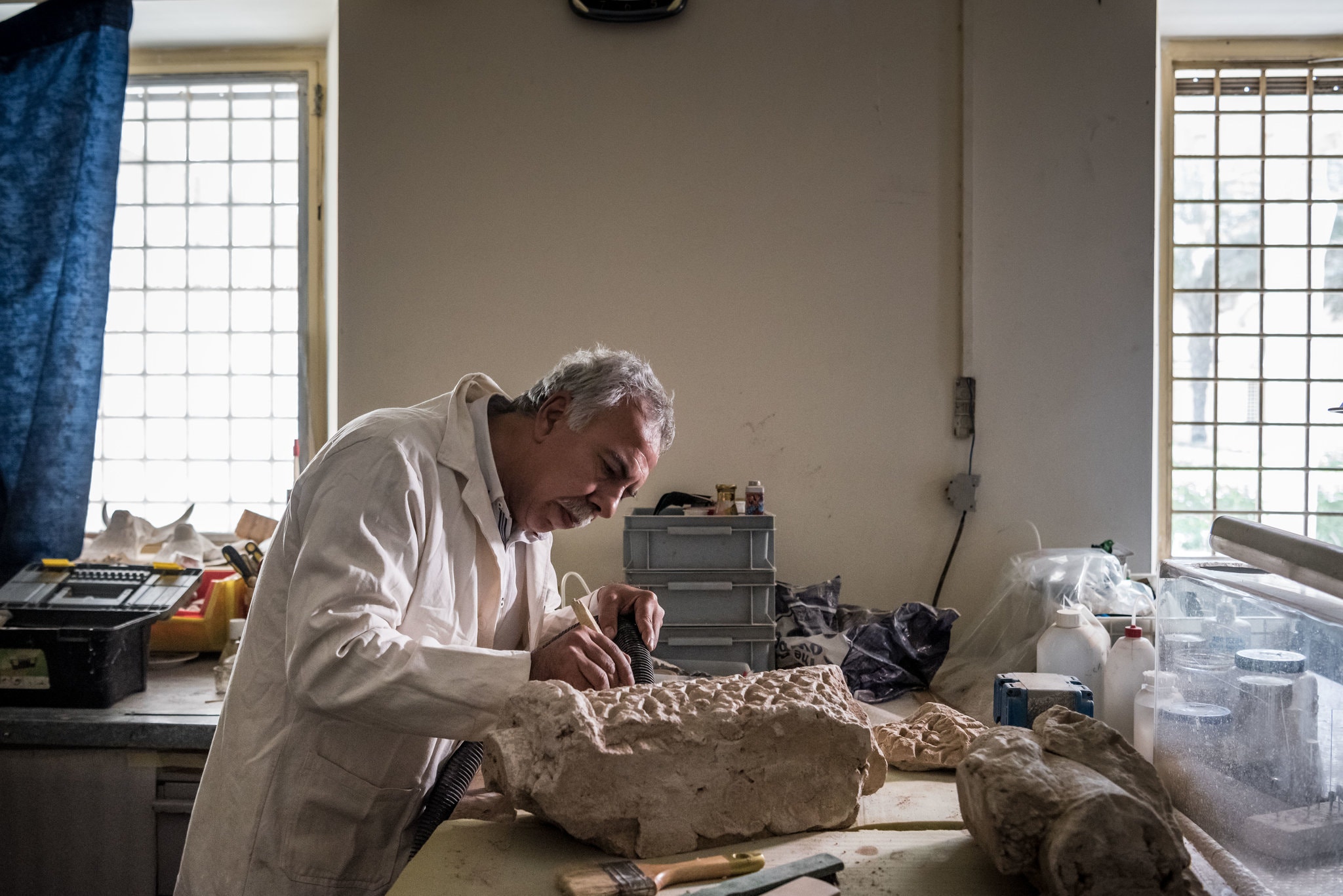 Restoring a piece of a decorative column from about 1500 years ago.CreditSergey Ponomarev for The New York Times

The museum’s collection is so comprehensive that art historians say it is daunting to try to talk about it in its entirety.

“What is so striking about the Iraq Museum is the chronological span that it covers,” said Paolo Brusasco, an archaeologist and art historian at the University of Genoa, who has worked extensively in northern Iraq.

“From the Assyrian period all the way to the Ottoman,” he said.

The museum’s earliest pieces date to almost 4000 B.C.E. That is more than three millenniums before the ships described by Homer plied the Aegean Sea or the Old Testament was written.

The collection has painted pottery in the shape of strange creatures whose mouths double as spouts; tiny sculptures of animals thought to have been toys; fragile boats made of a light wood found in ancient graves. Historians conjecture that the boats were intended to carry souls to the next world.

There are statues of men and women with large, incredulous eyes as well as fragments of beautifully carved parts of mosques that are a mere few hundred years old.

Statues representing Abu, right, the god of fertility, and his wife, dating from 2800-2600 B.C.E. Credit Sergey Ponomarev for The New York Times 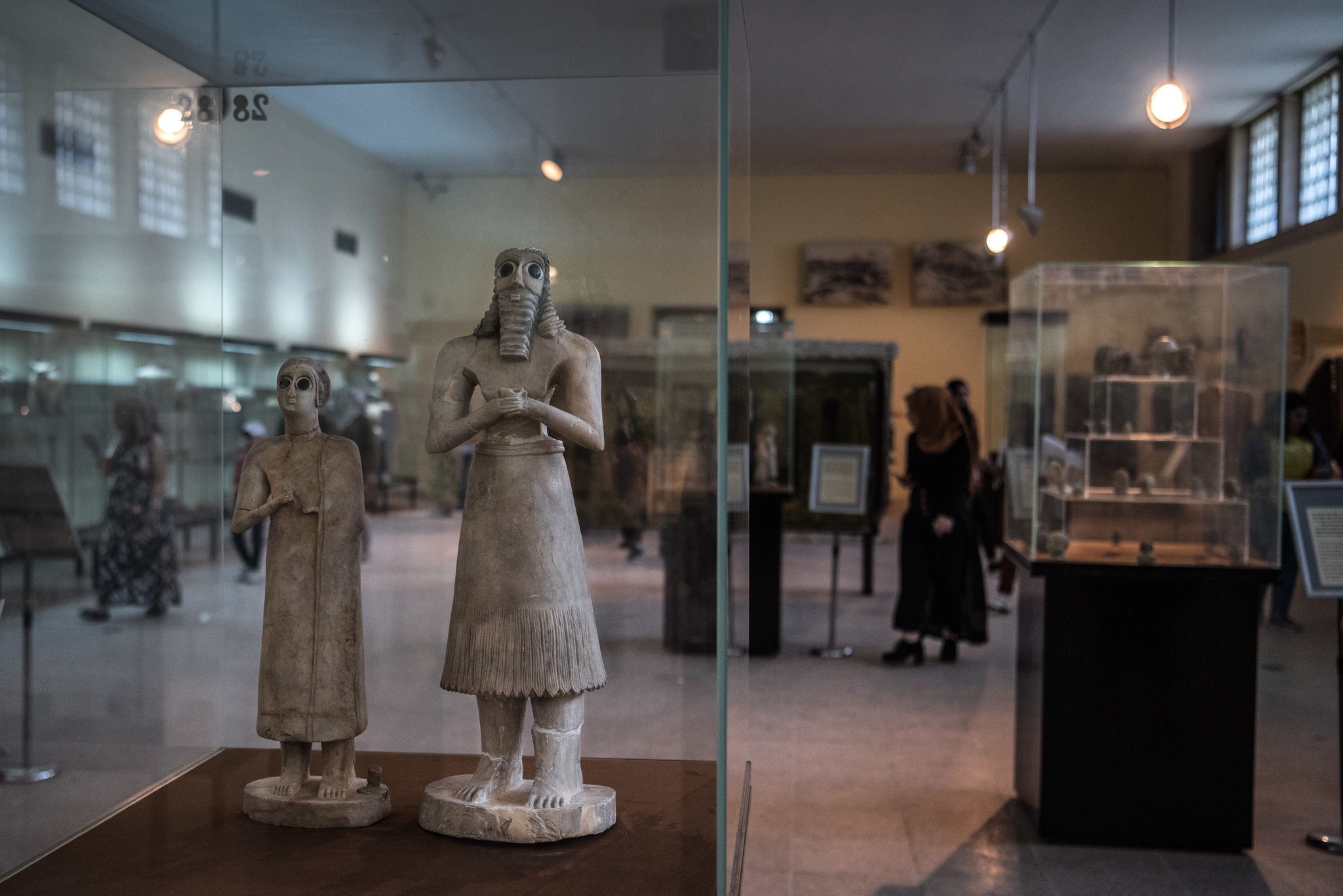 Statues representing Abu, right, the god of fertility, and his wife, dating from 2800-2600 B.C.E. Credit Sergey Ponomarev for The New York Times

While there are superb examples of Sumerian art outside Iraq, most notably at the Louvre, the British Museum, the state museums in Berlin and the Metropolitan Museum, as well as the Oriental Institute in Chicago, the Iraq Museum has it all, Mr. Brusasco said.

The museum’s origins date to the early 1920s when Gertrude Bell, the British administrator and explorer who helped to establish modern Iraq, worked with King Faisal to create a museum of Iraqi art by stopping Western archaeologists from walking off with all of the country’s treasures.

They pushed through legislation requiring that foreign excavators donate at least half of their finds to the museum.

Today, Iraqi law stipulates that anything found in Iraq, stays in Iraq. That means the museum’s collection will continue to grow since there are some 13,000 archaeological sites in Iraq and a number of continuing excavations, Mr. al-Hamdani said.

But Mr. al-Hamdani sees his main challenge as figuring out how to create a culture of learning around the museum.

Schoolchildren walk among statues at the museum. Credit Sergey Ponomarev for The New York Times 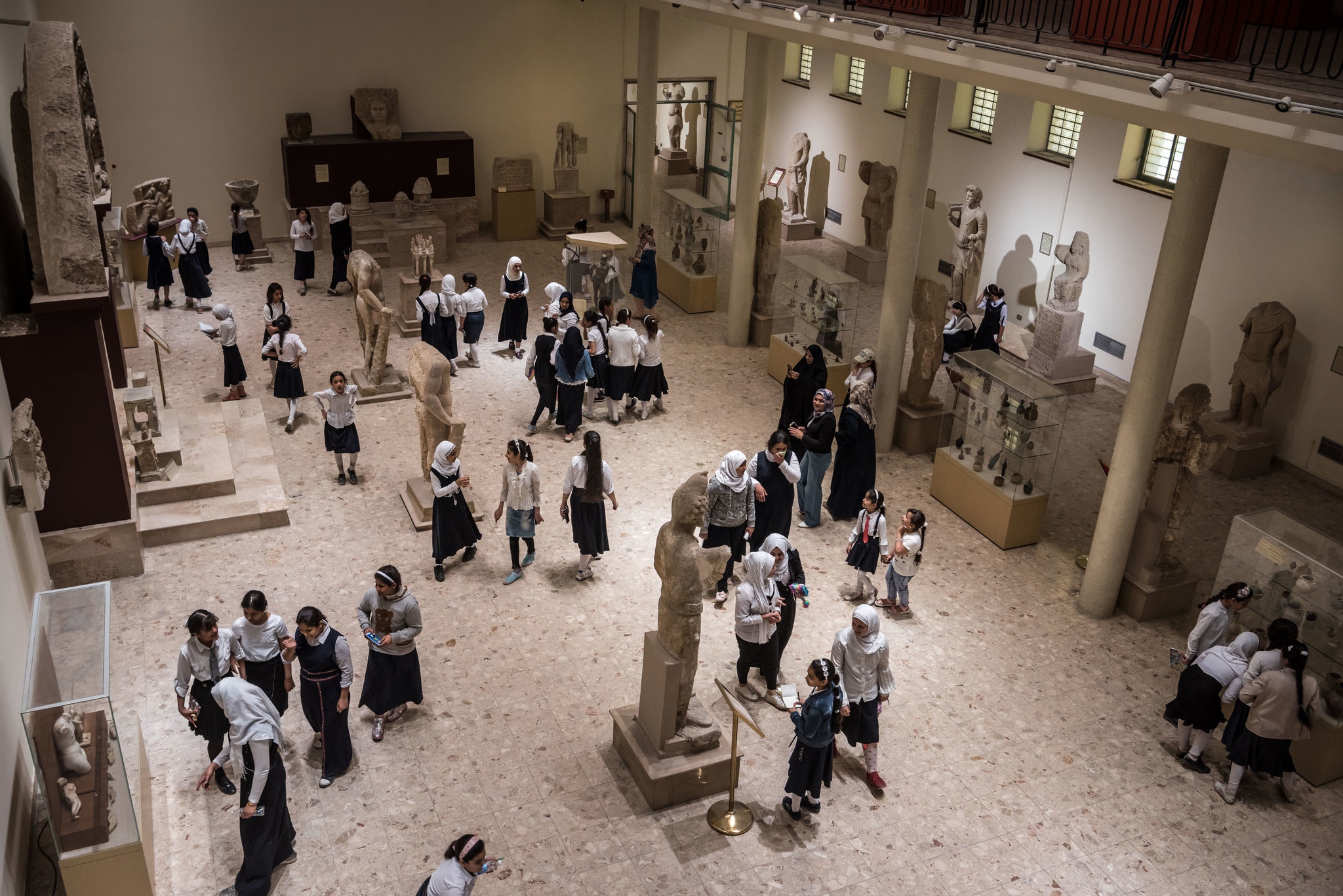 Schoolchildren walk among statues at the museum. Credit Sergey Ponomarev for The New York Times “We have to give visitors a context,” he said.

“Putting artifacts in a box is like a death,” he added, referring to the glass cases that house the collection’s smaller pieces. “In a box, art has no soul.”

Great works like the three-foot-tall Warka vase, which was recovered, are arresting sights but much more so when their history is explained.

The Warka vase, for example, was found in Uruk, in present day Muthanna Province, which archaeologists believe was the world’s largest city at its height, and where the earliest examples of writing were found — in cuneiform on clay tablets.

The vase is a rare example of the most ancient narrative art, telling its story in four tiers.

Mesopotamians were among the earliest beer brewers, using barley as a critical ingredient. Tablets describe 30 to 40 different kinds of beer and specify different qualities, he said.

There is no end to the past in Iraq, said Ali al-Nashmi, a professor of archaeology and history at Mustansiriya University in Baghdad.

“In Iraq, cities are built on top of cities,” he said.

An earlier version of a picture caption with this article stated imprecisely who was represented by two statues. They represented the god Abu and his wife. They did not both represent Abu.