Conflict with the north 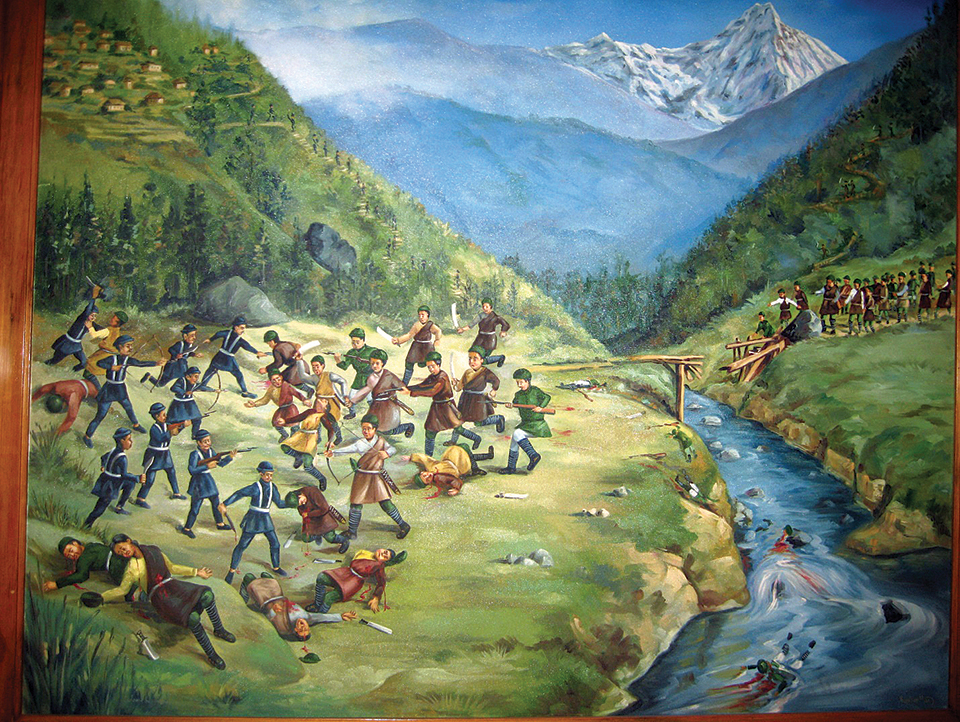 The 1791 war China resulted in loss of many things for Nepal, including Nepal’s suzerainty-like control over Lhasa and other Tibetan areas. With loss of Lhasa, Nepal lost its economic lifeline

Tibet was a good market for Nepali traders and Nepal had good ties with Tibet. With marriage of Nepali princess Bhrikuti with King Tsroang Chong Gympo of Tibet, diplomatic and official relations became cordial. Following that many Nepali merchants and officials also married Tibetan girls. Eventually, Tibet and Nepal had both people-to-people and government-to-government ties.

But Nepal was much more prosperous than Tibet during the Malla period. Tibet had no coin minting system and Nepali silver coins were used as running currency there. But during their last days, Malla Kings started to mint impure coins, causing great irritation to Tibetans. King Prithvi Nayaran Shah instructed the minting of pure silver coins after his conquest of the Kathmandu Valley. But Tibetans refused to accept those new coins until Prithivi Narayan Shah accepted Tibetan demands. That case was not resolved due to untimely demise of Prithivi Narayan Shah. Coin conflict continued and reached the culminating point in 1788.

Another reason of conflict was Nepal granting asylum to Syamarpa Lama with his 14 followers. He had fled from Tibet to Nepal on religious and political pleas. Nepal started to claim the salt provided to Nepal by Tibetans was of low quality. Conflict escalated. So while Bahadur Shah, younger son of Pritivi Narayan, was running Nepal’s administration as the regent of infant king Rana Bahadur Shah, war broke out between Nepal and Tibet.

Nepali troops captured Chhochyang and Kuti in June and Sikarjong in August, 1788. Nepali troops faced troubles due to lack of logistic support. Later Bahadur Shah was able to provide reinforcements and some additional logistic arrangements. They could not advance according to their plans but continued with offensive anyway. When Nepalis were about to capture Digatcha from Kuti and Kerung axis, Dalai Lama started asking for peace.

Negotiations started and Nepal and Tibet agreed to a treaty. Tibetan battle culprits were handed to Tibetans by Nepali side. Tibet agreed to pay tributes of Rs 50,000 in silver coins per annum to Nepal. To that effect, a treaty was signed on June 2, 1789 in Kerung, which is why it is also called “Treaty of Kerung”.

What should have been the precursor of permanent peace turned out to be the cause of hostility only with Tibet but also with China.

Tibetans were compelled to sign the Kerung treaty because they had no other option and they agreed to pay Rs 50,000 per year. For the first couple of years, they paid immediately but they started to delay the payment and finally refused to pay. So in 1791, Bahadur Shah prepared for the next war with Tibet. Nepal made offensive plan through Kerung, Kuti and Kharta axis. In Kerung, KajiAbhimansingh (Sripali) Basnyat was appointed as the commander. Captain Kalu Pandey (Brahman), Sardar Jaswanta Bhandari and Sardar Ranajit Kunwar were the subordinate commanders. Their tasks were to capture Jhunga initially and link up with Kaji Damodar Pandey to capture Digarcha. Kaji Damodar Pandey was the commander of Kuti axis. He was joined by Kaji DevduttaThapa, Bom Shah, Jaharsingh (Sripali) Basnyat and Sardar Prabal Rana Magar among others. Their tasks were to capture the Kuti area and link up with Kaji Abhimansingh Basnyat to capture Digarcha. Kaji Kirtimansingh (Sripali) Basnyat was the commander of Kharta axis. His task was to capture the Kharta initially and link up with Damodar Pandey in Kuti to destroy Digarcha. His troops advanced via Chainpur (now in Sankhuwasabha district).

From Chinese and Tibetan side, total of 17,000 troops were advancing toward Nepal through three different routes: a) through Lhasa–Kuti– Duguna–Listi–Jalbire–Chautara-Devpur–Naladum (they fall in Sindhupalchowk district) and Kathmandu, b) through Lhasa – Kerung –Rasuwagadhi–Betrawati-Nuwkot and Kathmandu and c) through Lhasa-Khatra-Chainpur-Kathmandu. The troop in the third route was approximately 3000 but they immediately withdrew fearing the attack from Kirati people.

The war took a different turn when China extended its support to Tibet. Nepal’s war with Tibet tuned into war with China. The joint army of Tibet and China launched counterattack against Nepal at a time when majority of Nepali troops were engaged in expansion campaign. On top of that, they were busy crushing the revolts launched in Achham, Doti and Jumla. Accordingly, they had only a limited number of surplus army to fight against Chinese invaders. Nepal Army was not large enough for a defensive battle.

Nepali troops involved in expansion campaign elsewhere were called to join the war to defend the country. They travelled on foot hundreds of kilometers to Nuwakot. Chinese were advancing toward Nepal but Betrawoti and Trishuli rivers were major obstacles for them. It was the last hope of Nepal’s defense.

Chinese and Tibetan joint army was huge and strong. The war took place in several parts of Tibet and Nepal lost the battles and started to withdraw to Betrawoti river of Rasuwa. Chinese army also faced unanticipated hurdles in Betawoti battle.

It was then that China sought peace with Nepal. Thus at the end, Betrawoti–Rasuwa became the safer defensive line for Nepal. The Chinese were losing many lives day by day and they also were in a hurry to negotiate with Nepali officials.

The Treaty of Betrawoti was concluded and the war was over. But Nepal lost many things from this treaty including Nepal’s suzerainty over Lhasa and other Tibetan areas which Nepal had enjoyed since the Malla period. Once Nepal lost Lhasa, it lost its economic lifeline. This loss was a major cause for Nepal to lose Anglo-Nepal war due to economic crisis.

Looking back, it can be said that Nepal could have avoided war with China if it had negotiated with China diplomatically. If Nepali troops had not involved in looting of Tibetan monasteries, including the one belonging to Chinese emperor, China would not have come into the war.

Betrawoti Treaty was as humiliating for Nepal as Sugauli Treaty. The days of glory that Nepal enjoyed were coming to an end, bit by bit.