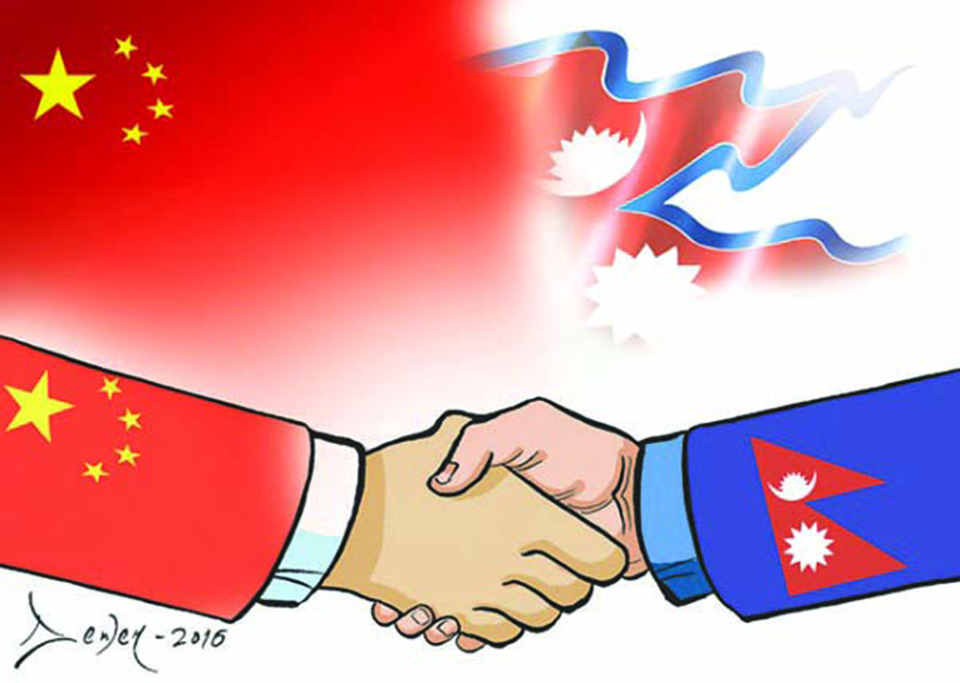 In absence of high-level visits from China, goodwill and cordiality had been shadowed. President Xi Jinping’s arrival in Kathmandu will renew cordial ties between China and Nepal

The relation between China and Nepal actually starts with trade. Nepal in the past used to import goods—from salt to gold to wool—from Mongolia, China and Tibet. The temples with gold plated roofs in Kathmandu hint at a huge flow of gold into Nepal from those countries. Although it is not easy to give an exact date of start of the relation between the two countries, based on what little evidence there is, we can say our relation with China dates back 3000 years ago.

We invoke arrival of Manjushree while talking about historic relation between the two countries. Evidences show relation between the two countries started first at individual level since the fourth century by which time it was already over hundred years when Buddhism entered China. This makes Nepal’s diplomatic relation with China the oldest in the world. Let’s refer to Manjushree story again. It is said that in ancient time a scholarly sage called Manjushree from China came to Kathmandu and cut open a rocky hill called Chobhar to let the water from the enormous lake out. The new settlement thus derived its name Manjupattan. In those times, there was a practice of sending a religious envoy to each other. As per the practice, an envoy from China arrived in Nepal and had an audience with king. Another religious envoy came to Nepal in 406. Huen Tsang with the same status visited Nepal and was received well in the royal palace. He is probably the first foreign visitor to describe the exact size of Nepal in that time. He says Nepal had an area of 4000 square lee (three lee is equal to one mile).

Around 647, during King Narendra Dev’s tenure, Chinese envoys Lee Payo Chhen and Wang Tse visited the palace of king of Kannauz of India. The king, impressed by the visitors, gave them a good send off with notable gifts. Shortly after the king was assassinated by his Chief of the Army Arunashwo and unceremoniously took the gifts back, sending the visitors with dishonor. Once the king of China learned about the incident, he immediately approached Nepal and Tibet. Around 70000 cavalry from Nepal and 1, 200 soldiers from Tibet reached Kannauz, attacked the king, held him captive, brought him to China, and was later hanged. That Nepal-China relation was very good during Lichhavi period is justified from the fact that king Anshuverma had arranged his daughter Bhrikuti to marry Tibetan king Songsten Gampo.

On request of the Tibetan king, Lichhavi king Jaya Bhimdev sent a team of 80 builders and carpenters led by Balbahu (Araniko) to Tibet. Chinese Emperor Kublain Khan was impressed by the artistic Gumba built by the Nepali team of artists. He asked the team to visit China to build several similar Gumbas and Chaityas. The Nepali team of artists in 1262 reached Peking for that purpose. In 1271, they built a structure that we call White Pagoda today.

Because Nepal-China relation remained cordial all throughout the Malla era, Nepal had strong influence over Tibet and had comfortable trade ties with Tibet. It contributed to sound economy of Nepal. This cordiality was broken after Nepal-Tibet war of 1791.

Post 1816, Nepal suffered British domination. Because China was embroiled in its internal problems, China could not come to help Nepal during the war with East India Company.

Nepal-China relation experiences a fresh and pleasant turn by exchange of goodwill and official visits. But in absence of high level visit from Chinese side, this goodwill and cordiality had been shadowed. In this regard, Chinese President Xi Jinping’s arrival in Kathmandu today will mark renewal of cordial ties between China and Nepal.

The high Himalayas and a chain of difficult terrains with round the year cold climate in the region hinder people-to-people relations. Nepalis cannot afford to travel to and from China by airplane. If there were link roads and railway line, they would make it easier for Nepali people to visit China to learn working discipline of the Chinese people. People in Nepal expect China to link Nepal with it through road, railway and ropeway, which would increase economic activities in Nepal. Understandably, road and railway link is the base for people-to-people communication between the two countries. Let me suggest few measures to enhance people-to-people ties between the two countries.

First, publication of books and journals about Nepal-China relation in both Nepali and Chinese would enhance communication. Many Chinese do not know about Nepal and same is the case with Nepalis. Publication of books and journals would break this impasse. Similarly, religious, cultural, political and trade history of Nepal in Chinese would definitely generate Chinese people’s interest to learn about Nepal and come to visit it.

Nepal is small in size but rich with tourist destinations and centers of pilgrimage, mainly Lumbini—the birthplace of Lord Buddha. If Nepalis visit China in cost effective transport means of bus or train they would see Chinese culture of hard work. It would contribute to further strengthening Nepal-China relation. Nepal is a birth place of Lord Buddha with significant number of Buddhists. There are Buddhists in China too. That is enough reason to connect the two countries with religious affinity. History says about 3000 years ago, the Chinese set out in a tour to Nepal and India in quest of Buddhist religion and peace. That can serve as a connecting bond between peoples of two countries.

Nepal is an agricultural country with industrious people. The farmers are so busy and poor that they cannot afford to travel to visit the parts of their country forget about visiting beyond the borders. If they could visit China at affordable cost to see the agriculture farm, tools and techniques and working culture, they would apply the same back in Nepal. Likewise, Chinese farmers would learn about the climatic and vegetative diversities and farming tools and techniques of Nepal. Farmer-to-farmer interaction would be rich in learning.

Journalists’ visit would also be important. Journalism is a very effective means of communication and transmission of news. Thus journalist exchanges should also be promoted. Language works both as a bridge and barrier for communication. It is language through which humans express themselves and understand others’ expression. Because there is no provision of Chinese and Nepali language teaching in the public level, there is communication barrier. This barrier should be removed. It is equally important for both Nepal and China to work to reduce trade deficit with China.

For the two countries to have closer ties there should be people-to-people love and friendship. Public relation helps clear political and diplomatic misunderstanding. China and Nepal should make an attempt to learn about each other’s history, culture, trade and tradition. Leaders may die and political system may change but history survives for centuries. It is the history that connects the countries. We need to get connected through the bonds of history, culture and tradition.

The visit of President Xi Jinping is going to contribute to strengthening this bond of history between Nepal and China. President Xi, welcome to Nepal.

The author is the Brigadier General (retired) of Nepal Army