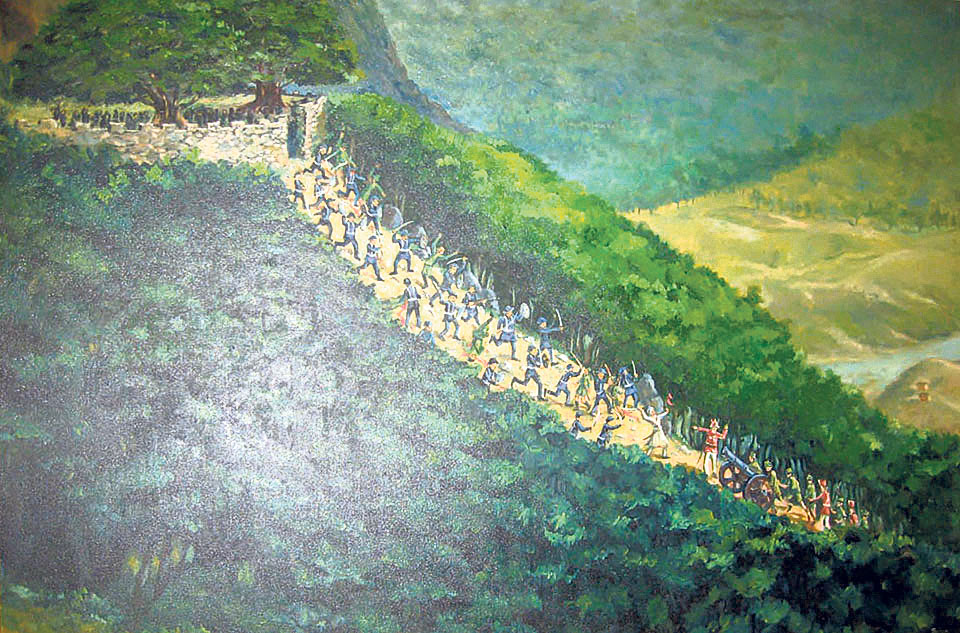 Allow me to say something at the outset. I have been in a mission to document history. I have been travelling across the country and hope to go across the border too. The main mission of my travel is to explore how Nepal was under attack from various powers in the past and how Nepal managed to resist or fight back for the sake of safeguarding or expanding its territory. This history mission of mine, however, is basically focused on recording, documenting and archiving the forts—which are several in number—through which or from which Nepal faced off and resisted foreign aggression in the course of its survival or expansion.

I began from Sindhupalchok where there are many forts from which Nepali soldiers fought against the Tibetan and Chinese forces. I wish to inform my readers about every fort, but this time I have been overwhelmed by the forts in Sindhuli district.

There are two forts—one small and other big—on the hill of Sindhuli Gadhi. Pauwa Gadhi is one which lies on the sloppy hill to the south, which is also called Aada.

Historical evidence shows there was a fort on Sindhuli Gadhi hill since the rule of Malla dynasty in Kathmandu Valley. It was used for immigration, customs control and military use as and when required. But southern part of Mahabharat Range was ruled by Sen Kings. It was so with states of Makawanpur, Chaudandi and Bijaypur. Aada (later called Pauwa Gadhi) was under the control of Sen Dynasty. Pauwa Gadhi or Aada was the place wherefrom Sen Kings collected taxes and controlled immigration.

Located in Makawanpur State, there was a rest house (Pauwa) with the availability of drinking water facility during that time. Sen King had hired the local Magars to fetch drinking water from the far-away places in order to feed the commuters. Located close to a rocky slope, the place would be used by commuters as a resting place. No other fort seems to have been built during the Sen Dynasty.

Pauwa Gadhi was built against a rocky slope by constructing a stone wall as Gorkha troops faced inconveniences during the fight with Captain Kinloch’s troops in 1867. Only then it came to be called as Pauwa Gadhi. Until that time, it was recognized as Aada.

It was from Pauwa Gadhi that Gorkha troops attacked the English troops led by Captain Kinloch.

The big and small forts were built by the then Commander-in-Chief Bhimsen Thapa in a hurry to prepare for the Anglo-Nepal War. The big fort was built for the infantry, while the small one was for artillery weapons. A military barrack and administrative buildings stand there since then.

When exactly Nepali troops started to attack the English troops is yet to be ascertained. But there are different dates. It could have started on September 28, 1785. A detailed handwritten report submitted by Captain Kinloch is available in the British Library and what has been written there will settle the matter.

The English troops led by Captain Kinloch entered Nepal only after last Malla King of Kantipur Jaya Prakash requested the East India Company for the support for protection from Gorkha invasion. The English troops did not enter Nepal to capture the country, which is why it was called ‘Captain Kinloch’s Expedition.’ Gorkhali troops attacked them because they were passing through the Gorkha-controlled territory to go to Kantipur and this could pose security threat to Gorkha State. Hundreds of English soldiers were killed, only about seven of them of British origin. Rest were Indians.

As Gorkha troops encircled the Kathmandu Valley, the latter was in crisis. In that situation, Jaya Prakash Malla was sure to face the Gorkha invasion someday. To protect his state, Malla sent a formal letter seeking military assistance to East India Company in March, 1767.

When Prithvi Narayan Shah came to know about this, he dispatched a letter to East India Company through Commander-In-Chief Kehar Singh Basnyat in Patna and requested him to grant him a formal permission to meet him later in Patna. But British India rejected his request and warned him not to create any trouble against Jaya Prakash. The British had no other interest of supporting Jaya Prakash Malla than trade. They wanted to make Jaya Prakash forever grateful to British India so that they could conduct trade with China through Nepal.

Kinloch-led military troops wanted to reach Kantipur. As per the plan, his troops would reach Panauti in 11 phases—throughout which Jaya Prakash was supposed to manage for their food and lodgings. The immediate objective was to send reinforcements to the Kantipur army for saving Kantipur from Gorkha attacks. The English troops were in Nepal at the request of Malla for safeguarding Kantipur.

Although Gorkha State had made a diplomatic request to the East India Company not to extend military assistance to Jaya Prakash Malla, the English troops were mobilized. This was against strategic plan of Gorkha State. So, Gorkha troops made a spoiling attack by setting up multiple ambushes against about 2,000 English troops while heading to Sindhuli Gadhi from Sindhulimadhi. The English were not informed that the territory between Sindhuli and Panauti was under the control of Gorkha. The English troops, therefore, were moving to Kantipur using the land of the Gorkha State unknowingly. And they had done so without taking permission from the latter.

After being chased away from Pauwa Gadhi by the Gorkha troops, Kinloch, along with his remaining troops, withdrew to Janakpur. Then, he reorganized the remaining 800 soldiers and planned to launch another expedition to Kantipur by advancing along the Bagmati River.

Kinloch sent a message to the King of Kantipur informing about his failure to arrive in Kantipur. The English Captain might have been guided by his revenge motive after losing his prestige at the battle of Pauwa Gadhi. On September 20, 1767, he marched his troops from Harihar Gadhi to Kantipur.

Kinloch reached the area which was about 50 kilometers away from Kathmandu Valley, and constructed a wooden bridge over the river in order to cross it. The river was Bagmati and Kinloch reached there through Hariharpur.

The torrential rainfall badly affected the troops and the bridge was swept away by the flooded river. The rainfall continued for many days and the troops failed to advance due to the shortage of food stuff. Kinloch returned as the troops tried to revolt.

The truth was Nepali troops had ambushed Kinloch’s troops as they were trying to cross the Bagmati River. Many enemies were killed in the spoiling attack. Kinloch again faced a shameful defeat and returned to Janakpur. Only then he stopped targeting Kantipur.

This is about Sindhuli Gadhi. If time permits, I will keep writing about other forts as well.